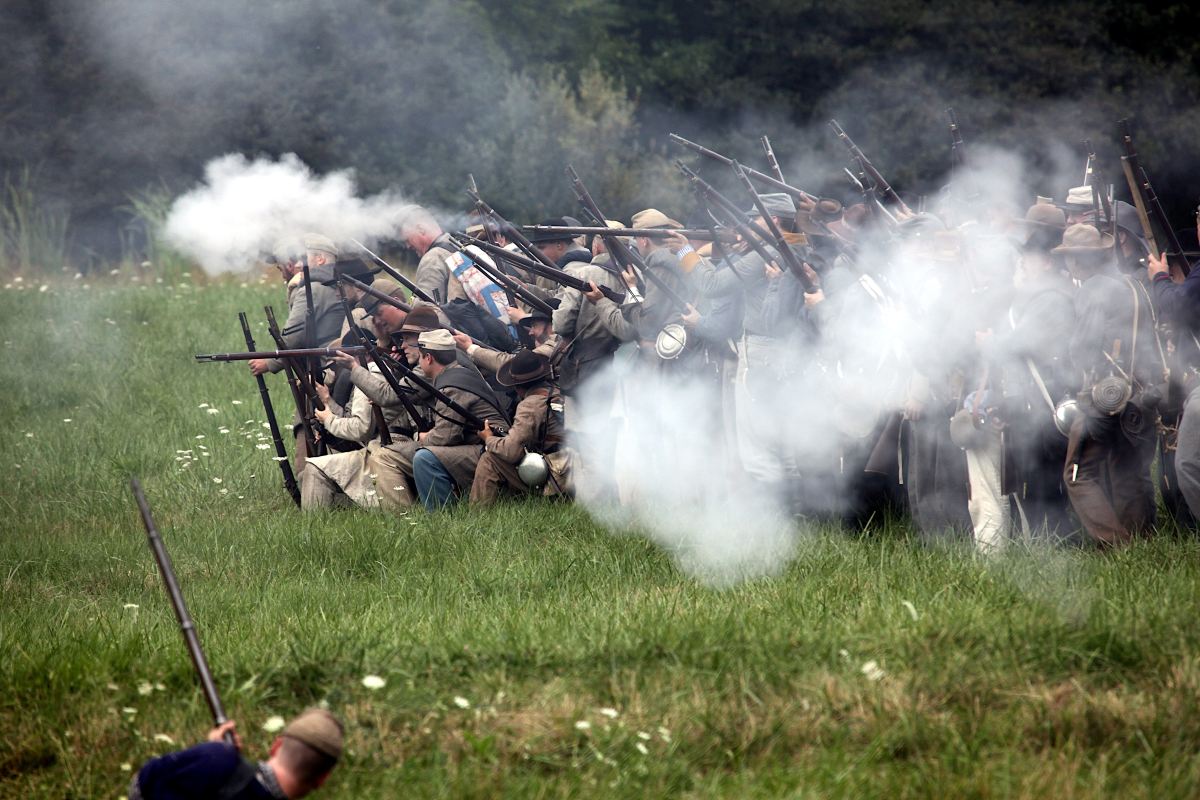 One year later, after the U.S. Civil War had started, and in the aftermath of “The Trent Affair,” with rising hostilities between the Union and Britain, Charles Spurgeon wrote another letter to the paper.

MY DEAR WATCHMAN AND REFLECTOR,—I ven­ture to write you, although I fear my letter will not be at all acceptable, and possibly you may see fit not to print it. You are quite welcome to put it into the waste-basket, if you think best to do so, and all I ask is that you will kindly publish every word, or leave it alone. We know not, as yet, what answer your government will return by the messen­ger dispatched from our shores, but our Christian ministers are laboring with diligence and earnest­ness to cool the war spirit, and all good men are hopeful that the peace will not be broken. May the Lord our God avert the terrible calamities which must attend a conflict between two nations so near­ly allied, so kindred in religion, in liberal institu­tions, and in blood. Be assured that all our church­es will pray for peace, and should it be broken politically, we shall feel that spiritually we must have fellowship with all our brethren, be their na­tionality what it may, for there can be no war in the one body of Christ.

Constantly reading your very excellent paper, I have looked upon it as a fair exponent of the feelings of the godly in the North, and I assume that I am not far wrong in the supposition. Well, then, I am sorry that you feel as you do towards England, and yet more troubled am I at the general feeling in this country with regard to your government. When your present conflict began, our whole na­tion, with a few worthless exceptions, felt an in­tense sympathy with the North. I met with none who did not wish you well, although there were some who feared that the struggle would be far more severe than you expected, and a few who sus­pected your soundness on the main question. We prayed for you, and hoped that the day of eman­cipation for every slave was fully come. I move among all classes, and I can hear witness that there were premonitions of a coming excitement and en­thusiasm, such as that produced by Garibaldi’s Italian campaign, so long as the idea had currency that you would contend for freedom, and our interest only flagged when that notion was negatived by the acts of your leaders. Right or wrong, we have now ceased to view the conflict from the slave­ry point of view. Whose fault is this? What have your statesmen done? Or, rather, what have they left undone? They have shown no interest in emancipating the slave. Principle has been thrust into darkness, and policy has ruled the day, and the consequence has been a long and disastrous war, instead of a dashing and brilliant victory. With “Emancipation” as your watchword, your empire would, ere this, have been safe and glorious. The Union safe, or at least, the North more than para­mount. You would not have needed any of our sympathy, but you would have had it to the utmost degree of enthusiasm. Our young men, and our old men too, talked like soldiers, and wished they were with you to fight in freedom’s hallowed strife. Your avowal of abolition would have made us deliri­ous with joy, for the freedom of the slave is a religion in England from which there are very few dissent­ers. But the universal conviction in England is, that the leaders of your government care nothing about slavery, and that they make you fight for empire and not for freedom.

You say in your issue of Nov. 28th, “The higher classes in England are friends of the South, while the people stand by our government.” Neither of these sentences has any truth in it. I speak what I do know, when I say that our public sympathy with your government is clean gone, not only with the higher classes, but more thoroughly and com­pletely with our people. Our populace, to a man, have ceased to respect the truckling policy which controls you, and I believe they would speak far more harshly of you than the richer classes care to do. It is no one’s business here which of you con­quers, so long as slavery is not at issue. That was the key to the British heart, it has been discarded, and we remain unmoved, if not indignant specta­tors, of a pointless, purposeless war. My whole heart and soul wished you God speed, until, like all the rest who looked on at your awful game, with an ocean between us to cool the passions, I saw clearly that only extreme peril would compel your leaders to proclaim liberty to the captives. That trial you have had, do the right, and your trouble will be over.

We cannot love the South. They are not and cannot be our natural allies. We have few bonds of relationship there, and no commercial ties which we would not rejoice to sever. Even if a spasmodic interest should be excited by your violation of our flag, yet we never can have any hearty union between our people and the slaveholding South. Cotton, I confess, is a great bond, and the stoppage of its supply is a serious calamity, hut as far as I have seen, our people had made up their minds to bear hard times patiently, in the hope that slavery might cease. I believe that our people would sooner pay a tax for emancipation, or bear the stoppage of their trade for the sake of the slave, than for any other motive under heaven. But we are disappointed. A noble opportunity has been frittered away. Halting between two opinions has ruined the cause. The friends of Africa are sick at heart. Your government has fooled you. It dared not do the right for fear of consequences. It courted useless friendships and tried to buy them with hesitations and compromises. Had it but dashed at once into the “irrepressible conflict” all civilized nations would have honored the courage and decision which would run any risk sooner than allow the barbarous and diabolical crime of slavery to fester in your constitution. But your rulers must be driven to virtue, for even when upon the verge of it, they start back alarmed. Why was Fremont silenced? What power is that which leads your Cabinet to be so fearful to commit it­self upon the point of slaveholding? Why leave your most powerful weapon to rust upon the shelf? Have you no means of pressure by which you can compel your rulers to find their senses and give up their vacillation. To hesitate is to court disaster, to decide is to overcome.

No one can fail to admire your loyalty, but surely some of you must have had stern difficul­ty in enduring such protracted temporizing. Be loyal still, but constrain the President and his council to be loyal to your public feeling, which I hope is sound at heart. Will not the slave ques­tion soon be made the point in issue? For your own sake will you not let loose the black tempest from its chains of darkness? I earnestly pray that in all thoroughness, the cause of freedom may be taken up boldly and at once; and I am sure that with our usual unanimity we shall return to our natural position towards you, viz., that of unfeigned sympathy and hearty good-will. You may reply that this is of no value. I reply, that you are a little angry, and therefore I will plead that it may be of service to your kinsmen and brethren in Eng­land, and to the world at large, therefore win our love for our sakes if not your own. It may tend to produce a healthier feeling between the two nations, if it be fully understood that the people of England deprecate the idea of a quarrel with you, and sincerely desire unbroken and profound peace, but the blood of the Old Saxons is as fully in our veins as in yours, and no Englishman feels any sort of fear of you, your fleets, your armies, your expeditions to Canada, or any other enter­prise you may set on foot. We neither despise your weakness nor dread your strength.

But why should there be a fight at all? What good can come of it ? Could not every end be answered by arbitration better than by blood ? In the presence of heathen and popish nations wherefore should two protestant powers disagree? It will be a crime, a treason against Heaven, a despite to the cross of Christ. We are co-operators in every good work, and in some we willingly yield you the palm, but wherefore should we differ? Why, above all things, should we be made to kill each other against our wills? We have both had our sins to­wards the sons of Ham, let us bear the brunt to­gether, you the war, and we the evils of blockade. Do you hasten to proclaim “liberty,” and we on our part, if we be not permitted to interfere with effec­tual aid, will endure patiently the necessary stop­page of trade, will rejoice in your successes, and never even dream of your being repulsed.

We both seem to be drifting most ridiculously, but most lamentably from our proper positions. Our place is at your side in a great moral conflict, yours is it to make that conflict moral. We have all a thousand dear friends in either hemisphere; some of us have brothers on each side, and even children in both nations. We must get out of this quarrel somehow, without a rupture, and in my heart, I believe that your proclamation of emanci­pation will do it. How can we be your enemies if you are the friends of the slave ? If our govern­ment should attempt to aid the South for the mere sake of cotton, (which they would not do, for at present ours is the most popular of all governments, and feels the most readily the motion of public sentiment,) thousands, yea millions of us, would abhor the selfish and unhallowed combat, and it could not last.

The scales are trembling in the balance. May your voices cry aloud for peace and liberty. Some few words of reconciliation, a little mutual forbear­ance, deaf ears to irritating newspapers, and a no­ble publication of freedom to the captives, and the two nations will be sworn friends. O Lord, grant it may be so. Never did prayer rise more heartily or earnestly to heaven’s throne. I pray you join in it with your fervent “Amen.”

Now, Messrs. Editors, I do not write this as though my individual opinions were of any value in America, but because I know that the truth in these matters may ultimately be for the best. My letter on slavery excited so much ill-feeling, even in the North, that I did not see the use of my further correspondence, but this is duty, therefore I do it.

With heartiest affection to believers in the North,

Yours, most peacefully and honestly,

(Photo by Chris Chow on Unsplash)