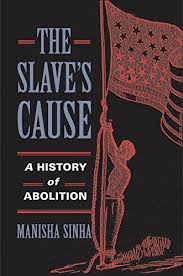 Most people don’t know very much about abolitionism in America. Perhaps the name that springs most often to mind is Abraham Lincoln and the Emancipation Proclamation. A few more know of figures like Frederick Douglass or Harriet Tubman, with little sense of the details of their lives or how they fit in their historical context. Some with an interest in America’s Civil War may know a little bit about William Lloyd Garrison and of course there is the field of scholarship covering the history of American slave-holding and its converse, the anti-slavery movements. Manisha Sinha’s The Slave’s Cause: A History of Abolition has something for every one of these groups, from the most barely acquainted to the seasoned scholar.

Sinha’s book is “a comprehensive new history of the abolition movement” (1) It is indeed comprehensive, and highly synthetic, challenging a number of “long-standing interpretive binaries” that have sprung up in the study of the movement (5). On a macro-level, this synthetic work is seen in the basic structure of the book, in two parts: The First Wave and The Second Wave. Where many think of mid-nineteenth-century figures like Garrison as typical of the abolitionism, Sinha documents how “the American abolitionist movement unfolded in a hundred-year drama in law, politics, literature, and on-the-ground activism. To reduce emancipation to an event precipitated by military crisis is to miss that long history” (2). The book opens with a rough sketch of slavery and anti-slavery in Europe and the “Pioneers” like Bartolomé de las Casas, before focusing attention on American and British abolitionists. This review could be filled (as Sinha’s book is) with names and dates of partly-known, little-known, or utterly unknown figures in the “hundred-year drama.” Worth mentioning in the first wave are Anthony Benezet, “an eighteenth-century abolitionist who matched the pivotal role of William Lloyd Garrison in the nineteenth century” (20) Benezet’s active life involved writing, publishing, and correspondence which “created an antislavery network” (24). His correspondents included Granville Sharp, Benezet’s “British Counterpart” and Selena Hastings, the Countess of Huntingdon, known for her support of Wesley, Whitefield, and the evangelical awakenings (22, 24). It is striking that when a different story is told with a different plot line (i.e., the story of slavery v. abolitionism versus the story of evangelicalism, or “revivals”) many of the same characters appear, but in entirely different roles. This book offers a vitally necessary retelling of history that is especially appropriate for evangelicals seeking to know more about their heritage.

From the very first chapter, however, another synthesis is evident, and that is the connection between black and white, male and female abolitionists. Immediately after highlighting the prominent white figures like Benezet, Sinha shifts focus to the “Origins of Black Antislavery” (24). Here, for example, she highlights figures like Phillis Wheatley and offers a correction. While Wheatley “is often portrayed as a lone genius,” she was “in fact representative of an emerging African American antislavery critique of revolutionary republicanism” (31). This opening chapter is typical of the entire work: “it centers African Americans in it” (1). Throughout the entire drama, there was deep interplay between slaves, slave-rebellions, escaped slaves, freed men and women, and their ongoing struggle for liberty in a land torn by that question. White abolitionists have figured prominently in previous tellings of this history, but Sinha gives us here a truly comprehensive account.

Subsequent chapters detail the revolutionary era (both American and Haitian) (Chapter 2: “Revolutionary Antislavery in Black and White”) the drawn out legal battles for emancipation in northern states (Chapter 3: “The Long Northern Emancipation”), the black and white transatlantic developments (Chapter 4: “The Anglo-American Abolition Movement”), and figures like Richard Allen and the African Episcopal Church (Chapter 5: “Black Abolitionists in the Slaveholding Republic”). The First Wave concludes with “The Neglected Period of Antislavery,” a crucial link between two acts in the drama that have often been considered separately, including the growing tension between colonizationists and abolitionists. Between The First Wave and the Second is a 24 page insert of pictures of abolitionists, literally granting visibility to figures, including black men and women who have been invisible to this point.

The Second Wave is much longer and more familiar. Overturning the caricature of abolitionists as “extremists,” Sinha highlights how “proslavery extremism predated radical abolitionism” (226). Abolitionism pressed for “immediatism” due to the influence of black protest against this aggressive “slave power” (Chapter 7: “Interracial Immediatism”) She explores in great detail the emergence of the abolition movement as we know it, including its inherent tensions (Chapter 8: “Abolition Emergent”). Especially fascinating was her take on “The Woman Question” (Chapter 9), documenting women as “abolition’s most effective foot soldiers,” the tension this caused for the movement, and the birth of the women’s suffrage movement out of abolitionism (226). Black abolitionism is studied as its own distinct phenomena in this era (Chapter 10: “The Black Man’s Burden”),  as well as the relationship between American abolitionism and the revolutionary movements in Europe in the mid 19th century (Chapter 11: “The Abolitionist International”). “Slave Resistance” (Chapter 12) was always the front lines of abolitionism, and the activity of fugitive slaves continued to fuel the growing movement through addresses and published narratives (Chapter 13: “Fugitive Slave Abolitionism”). The final chapters are a whirlwind leading up to war, on “The Politics of Abolition” (Chapter 14), “Revolutionary Abolition” (Chapter 15), and “Abolition War” (Chapter 16). The book ends at the start of the war, though Dr. Sinha is presently working on a book on the succeeding era, Reconstruction (https://www.radcliffe.harvard.edu/people/manisha-sinha).

The body of the book runs to 591 pages, with over 130 additional pages of detailed endnotes documenting primary and secondary sources. As such, this book functions extremely well as a sourcebook for additional research. The index is very thorough, so when one wishes to know where a particular person or movement fits within the broader scope, and find additional sources for further information. For example, this reviewer wished to know more about the scholarship and source material on Harriet Tubman after seeing the recent film devoted to her. The index and the footnotes were easily navigable, which is to say nothing of Sinha’s own careful treatment of Tubman in the work itself.

Though not a Christian herself, this evangelical found Sinha to be very careful and fair in her treatment of Christianity and even evangelicalism. At no point did she resort to caricatures or unbalanced criticism. Throughout the work Dr. Sinha does the work of a careful historian walking us through the complex and messy history that a “century long drama” necessarily is. This book is quite possibly the book on abolitionism in America. Evangelicals who are interested in American history need to read this work to understand our movement in its greater context. Anyone interested in abolitionism, at any scholarly level, needs to read this new comprehensive account in order to get the full picture for the first time.